Video of The Week:

Need Help With Your Hot Tub?

For years now mass merchants have been trying, unsuccessfully, to break into the Hot Tub market with promises of great prices on good quality Hot Tubs and Swim Spas. The reality is they have failed miserably to provide quality products at a competitive price, instead selling low end spas at prices that any budget online direct seller can meet or beat.

So why is it that these retail giants fail again and again with this product? Why are Costco Hot Tubs such a problem? Why do they never get it right? And why, when they do finally get a good quality product like the Canadian Costco Hot Tub from Beachcomber, is their price so high?

Well, lets talk about it...

In our 2021 Costco Hot Tub review, we look at the multitude of reasons why you really want to do your homework before purchasing a Costco Hot Tub, and why tbe internet is awash with complaints, stories of abysmal service and nightmare stories about Costco Hot Tubs.

The reality is that the mass merchants like Costco suck at complex products such as Hot Tubs for a myriad of reasons, including; lack of knowledge, lack of available information to consumers, lack of volume of sales, and their insistence at being the cheapest without understanding what makes a good Hot Tub... leaving them in the unenviable position of selling utter rubbish at prices that any local dealer could meet or beat if they were willing to sell such a low level of quality. 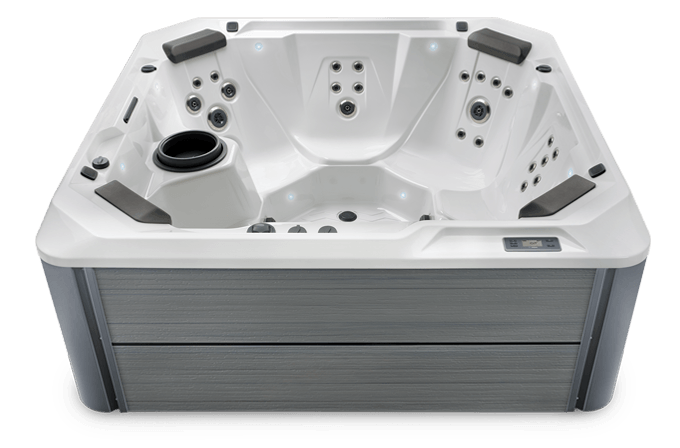 So lets look in depth at the reasons they keep failing their customers on this product and then lets have a look at some actual models and see how they stack up against quality Hot Tubs.

Hot Tub University uses a single proprietary algorithm that takes into account a myriad of things... from the weight and thickness of the shell, to various manufacturing techniques, to the quality of parts and it's unbiased in so much as it just crunches the numbers and gives a rating that takes into account known failure rates on various parts. Like leaks based on how the jet attaches to the shell or how the plumbing attaches to the jets, right down to the type and amount of resin used on the shell. When we run Costco Hot Tubs through our evaluator, they come out exactly where we expect them to! And for that price of spa? Right near the bottom!

" In our opinion, Costco Hot Tubs reviews are right, these are not good prices on great Hot Tubs; they are just regular pricing on cheap Hot Tubs... "

So let's look at what the Hot Tub University's evaluator says about Costco Hot Tubs when we run the numbers... But before I even do, all you have to do is look at the basic numbers to know it's a low end unit. After all, a 91", 90 jet, 3 pump spa that weighs in at only 800lbs (according to Strong whom I had to call for the information) means it has very little resin on the shell, it's a thin cradle supported low end Hot Tub... Hell, we have tested similar sized tubs with 40 jets and 2 pumps that weighed damn near 1400lbs! That means they are using almost as twice as much fiberglass and resin on the shell constitution and that's worth thousands of dollars alone! But, lets see what the Hot Tub University's Hot Tub Evaluator says!

The shell is constructed from fiberglass which means that it has an acrylic surface backed by fiberglass. While this is the perferred way to build a hot tub shell, the amount of fiberglass and how it is applied is key to the strength of the Hot Tub. In the case of this particular tub, the shell strength calculation indicates a weak shell which is of major concern and shell issues such as cracks or delamination are more likely in the future.

This Hot Tub has 2 pumps, a circ pump and 90 jets. More importantly, there is a total of 10hp driving those jets. To effecively move water with that number and size of jets, the pump will work extremely hard and shorten the life of the pumps. With the plumbing lines not clamped this tub runs a much higher risk of leaking than a Hot Tub with properly clamped plumbing joints. The issue is mangified by the number of jets since every jet becomes a potential leak point. The Hot Tub does not have foam insulation which means that all the plumbing is free floating without any support. This can increase the chances of leaks due to vibrations from the pumps.

The pumps in this Hot Tub will run very hot since the power of the pumps is not sufficient for the number and size of jets and premature failure of the pumps is likely. The Hot Tub uses Waterways jets which are among the best in the industry and are readily available from many sources so if you have any jets break in the future, they will be inexpensive and readily available.

One of the primary components that affect the construction of any Hot Tub is the shell itself. The shell of the Hot Tub is, obviously, what holds the water but it also forms the entire structure of the Hot Tub. The shell is constructed from rolled fiberglass which is our preferred method of shell construction but with a shell rating below 5, this is a weak shell and there is a significant danger of issues in the future. The shell is cradle-supported which means there are supports under the shell to help carry the load of the water. The better quality shells are self-supporting and require no additional support so this indicates weakness in the shell. The frame of a Hot Tub should never be used for shell support and, in a properly constructed Hot Tub, the frame is only there to provide balance and a place to mount the equipment and hold the skirting in place. A wood frame is the most common method of frame construction and supports the equipment and skirting very well.

The shell of this Hot Tub is cradle supported which means the shell is reinforced with support blocks. The need for these blocks speaks clearly to the strength of the shell and any shell that is self-supporting (as all Hot Tub shells should be) and should not have any additional support. The Gecko control system in this Hot Tub is not a terrible option but it is not at the same level as something like a Balboa. In addition, future repair costs will be higher because any pack will require heater replacement in 5-7 years and replacement heaters for Gecko packs are very expensive.

The pumps in this Hot Tub are slightly underpowered for the amount of water they need to push. This means that they will not operate at 100% efficiency but should be adequate for the Hot Tub. Mylar blanket insulation has been touted as space-age and exciting new technology but the truth is, Mylar blankets are great for reflecting heat from a point source (such as the sun) but do little to trap heat inside an enclosure because the heat in the Hot Tub is distributed so heat can escape very easily. This is the least effective method of insulating a Hot Tub and is done because it is far less expensive to the manufacturer than proper foam insulation.

The rating for the pumps in this Hot Tub are well below what would be required to move the amount of water in the plumbing system of this particular Hot Tub. This means they will run very hot and fail far more quickly than properly rated pumps. Perimeter insulation systems and blanket insulation, traps heat inside the cabinet of a Hot Tub. The main spa control pack and the pumps will be running in an environent that is much hotter than is ideal so both pump and pack life will be shortened. The jets in this Hot Tub are reliable and readily available from many sources so if any jets break in the future, they will be inexpensive and readily available.

Thank you for your comment. Before it appears, we have to review it to make sure you're not a robot or a monster though.....:) If it's a question we'll get you an an answer ASAP!